Barring a brief pause for the Fed meeting, this year’s sell-off continued, with the main protagonists still the same – unbridled fiscal spending combined with a Fed intent on keeping the gas pedal on the floor until well after it sees the whites in inflation’s eyes. Fed Chairman Powell retained his nonconcern for the rise in rates in his press conference, and reiterated that the Fed will not move off of zero rates until both the Fed’s employment and inflation objectives are met. He again specified that employment encompasses a broad definition, not just the unemployment rate, and inflation that “has reached 2 percent, and not just on a transitory basis, and inflation that’s on track to run moderately above 2 percent for some time.” Powell also commented in the press conference “I would point out that over the long expansion, longest in U.S. history, 10 years and eight months, rates were very low. They were at zero for, you know, seven years. And then never got above, you know, 2.4 percent, roughly. During that we didn’t see actually excess buildup of debt. We didn’t see asset prices form into bubbles that would threaten the progress of the economy.” That fact is not disputed, but what is concerning to investors is that during the period Chairman Powel is refencing, we did not have a $600 billion Covid relief plan (passed in December) followed by an additional $1.9 trillion plan in March, with expectations for a separate $2 trillion plus plan for infrastructure. To put this in perspective, in fiscal year 2019, the US Government spent $4.448 trillion.

As mentioned above, fixed income prices bounced the day of the Fed meeting, but resumed its decline the next day. It is interesting that after the FOMC statement and spending one and a half hours answering questions in the press conference, Chairman Powell also wrote a WSJ essay Friday. The final paragraph reiterates the full-on support. “But the recovery is far from complete, so at the Fed we will continue to provide the economy with the support that it needs for as long as it takes. I truly believe that we will emerge from this crisis stronger and better, as we have done so often before.”

This week Powell will speak at the BIS conference Monday, and with Treasury Secretary Yellen before the House and Senate Tuesday and Wednesday discussing the CARES Act, so there will be the opportunity for more questions, although a number will most likely have a political bias.

A summary of current pricing for Fed moves and comparable Eurodollar futures is below. Note that markets are pricing minimal tightening prior to June of 2022. The percentages represent the probability of a 25bp move, where 100% would equate to 25bp. Futures markets are currently pricing 150bp in tightening by the end of 2024, 100bp more since the start of the year.

In the late 1970’s the two economists who held the most sway on fixed income markets were Henry Kaufman of Salomon Brothers and Albert Wojnilower of First Boston, nicknamed Dr. Doom and Dr. Gloom. They were both timely and correct in forecasting that the “guns and butter” spending programs of the 1960s and 70s would lead to dramatic increases in both inflation and interest rates. At this time, there are many economists warning against the rise in spending, including former Democratic Treasury Secretary Lawrence Summers. Summers termed this the least responsible economic policy in the last 40 years. The two main economists saying not to worry are Stephanie Kelton of Stony Brook, the progenitor of Modern Monetary Theory, and Paul Krugman.  I agree with the economists expressing alarm.

The consolidative movement the past two weeks in Eurodollars has lessened the oversold condition, but not eliminated it. Tens had less of a consolidation and are still oversold. As seen in the chart below, EDM4 is in a descending triangle with multiple lows around 98.54. These patterns usually resolve in the same direction, meaning lower. TYM is similar although prices broke through earlier support at 131-23, now resistance. This week’s 3, 5, and 7 year auctions could provide a good market gauge, as it was a lack of demand at last month’s 7 year that sparked the last major leg of the decline. 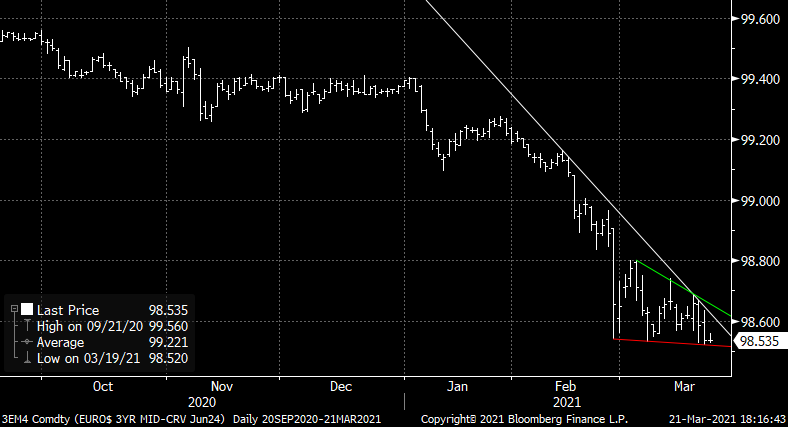 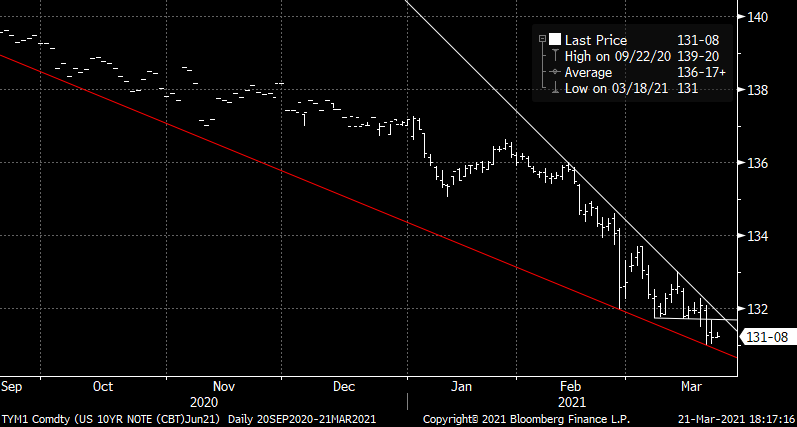 This information was obtained or gathered from multiple sources that are believed to be reliable. Wedbush Securities, Inc. has not independently verified its accuracy and does not make any representations as to the accuracy or completeness. This information is subject to change without notice and Wedbush Securities, Inc. has no obligation to provide any updates or changes. This material was prepared for and distributed to Institutional Investors or Professional Investors and should not be regarded as research or a research report. This material is provided for informational purposes only and is intended only for your own personal use and does not constitute an invitation to purchase or sell any of the products mentioned herein. In addition, the information is not intended to provide any basis on which to make an investment decision and it may be different from, or inconsistent with, the views of other Wedbush Securities, Inc.’s personnel or the proprietary positions of Wedbush Securities, Inc. Past performance is not a guarantee of future performance and no representation or warranty is made regarding future performance. The risk of loss trading U.S. Treasuries, federal agencies, futures and options on futures can be substantial. An investor can potentially lose all or more than their initial investment so you should carefully evaluate whether U.S. Treasuries, federal agencies, futures and options on futures are suitable considering your own financial condition. If you are unsure, you should seek professional advice. Additional information is available upon request.