This week the Fed is expected to tighten 25bp, the ECB to discuss ending QE (maybe), and the BoJ to
continue its stimulus. We will also get CPI, retail sales, and President Trump meets with Kim Jong Un.
The World Cup also begins Thursday, but that will probably be more of a trading distraction. Core CPI
has been greater than 2% the past two months and is expected to rise from 2.1% to 2.2%, although the
year earlier levels were influenced by the “transitory factors” Yellen frequently referenced, such as cell
phone plans. Monthly core CPI is expected to rise 0.2% vs unrounded 0.098% last month. We previously
stated the Fed’s biggest risk is that they achieve their goal with inflation, and continue to feel that is the
case, as the market could be forced to price in a more aggressive tightening path. As seen below, fed
fund futures are pricing substantially lower rates than the median Dot for both 2019 and 2020, obviously
reflecting markets banking on an end to the tightening cycle.

The table above shows that Fed Fund futures are pricing in 27.5bp lower rates for 2019 than the median
Dot and 73bp lower for 2020.

One of the key points to be gained from the Fed meeting is whether the June Dots will project one or
two additional moves this year following the expected move this week. The March Dots indicated one
additional move, but responses were not far from two. Recent Fed comments have implied there could
be a 4th Dot for 2018. Fed fund futures are currently pricing in 1.25 additional moves assuming the Fed
tightens this week. Incoming NY Fed President Williams recently stated, “The Federal Open Market
Committee has indicated a total of three to four rate increases this year and further gradual rate
increases over the next two years will be appropriate. I view this to be the right direction for monetary
policy.” Fed Governor Brainard, a traditional dove, has shifted in recent comments, stating, “I continue
to view gradual increases in the federal funds rate as the appropriate path, although I will remain
vigilant for the emergence of risks and prepared to adjust if conditions change.”

Another key point from the meeting will be if the Fed follows through on the 20bp increase in IOER that
was discussed in the minutes to the May meeting. Fed funds have been trading 5bp under IOER. If the
5bp spread to IOER continues, FFN8 would be 98.10 if the Fed tightens in June. The fact FFN8 settled
98.09 indicates the market is pricing the spread as 4bp, assuming IOER is only raised 20bp.

TECHNICALLY, it remains to be seen whether the recent rally in EDU0 was the beginning of a new move
or merely a bear market correction. EDU0 fell almost 140bp from September to May, and the two week
rally retraced slightly less than a 38.2% Fibonacci correction. Both MACD and stochastics are again
negative, and RSI is relatively neutral at 48. Green Sep broke through the steep downtrend line on the
rally, but is still within a shallower sloped downward channel. I am leaning toward the bear market
correction camp, and will look for a test of the May low of 96.82. With three central bank meetings, CPI
and Trump, there should be enough news to provide some directionality. 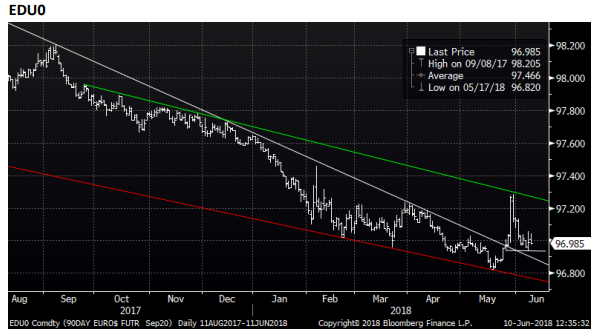 TYU8 is also within a shallower downward channel, but the oscillators are more balanced. Stochastics
are negative but MACD still positive. RSI is neutral at 51. Immediate support is at Thursday’s low of 119-
04. I also view the recent move in TYU as a bear market correction, but with less conviction than EDU0. 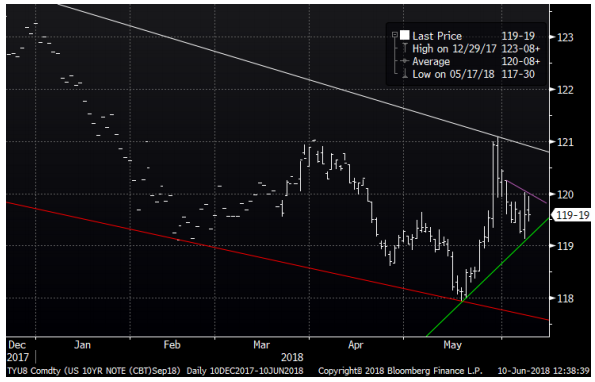 Midcurves vs Greens Downside
The key assumption behind this strategy is that short Sep (EDU9) will have difficulty getting a lot below
96.87 because EDU9 only has four quarterly meetings beyond September. At current fra/ois, if we price
the Fed going in June and September (0eu8 options expire 12 days before the 9/26 meeting), 75% prob
of going in December, and 50% prob of March, next June & next Sep, EDU9 would be 96.93. Green Sep
would have four additional meetings to price in.

This information was obtained or gathered from multiple sources that are believed to be reliable. Wedbush Securities, Inc. has not independently verified its accuracy and does not make any representations as to the accuracy or completeness. This information is subject to change without notice and Wedbush Securities, Inc. has no obligation to provide any updates or changes. This material was prepared for and distributed to Institutional Investors or Professional Investors and should not be regarded as research or a research report. This material is provided for informational purposes only and is intended only for your own personal use and does not constitute an invitation to purchase or sell any of the products mentioned herein. In addition, the information is not intended to provide any basis on which to make an investment decision and it may be different from, or inconsistent with, the views of other Wedbush Securities, Inc.’s personnel or the proprietary positions of Wedbush Securities, Inc. Past performance is not a guarantee of future performance and no representation or warranty is made regarding future performance. The risk of loss trading U.S. Treasuries, federal agencies, futures and options on futures can be substantial. An investor can potentially lose all or more than their initial investment so you should carefully evaluate whether U.S. Treasuries, federal agencies, futures
and options on futures are suitable considering your own financial condition. If you are unsure, you should seek professional advice. Additional information is available upon request